Culture and economic development, what is the link? Three examples from the Basque Country

There is much and little going on around the role of culture for economic development. Yet an inspiration to write this contribution came from two sides:

From one side, while experiencing the richness of local events in San Sebastian, which has been awarded the European Capital of Culture in 2016, made me think of what impact all these events could have on the city's economy; and from other side the richness of local traditions, which is very common to encounter in day to day life, made me consider if they in one or another way have contributed towards progressive development of the Basque Country. This potential inter-cultural-development can also be found in some other well developed European regions, as e.g. Bavaria or South Tyrol. Could this then mean that cultural heritage can be inter-linked with economic development?

With this inspiration I dug into the literature to search about interconnection between culture and economic development. I found that although this debate on culture as a factor of economic development is actually old, it has reemerged particulalry since experts set their eye on the creative industries, clusters and tourism. Indeed, the reference to cultural contribution to economic development as per Hezel (2009) and Harrisson (2006) goes way back to the works of Adam Smith and Max Weber. Smith (1776) in his work on Wealth of the Nations seemed to stress that “the pursuit of personal interest” could drive the human rationality of economic activity way stronger than money. Meanwhile, Weber focused on addressing productivity from the perspective of different cultures and even linking them to religious beliefs. Most of these conclusions are based on the historical comparison of different cultures and territories. In recent publications , more and more attention is being given to measuring this link, e.g. Vallrath (2014), stated that “culture affects economic activity through the choices that people make about how to allocate scarce resources (...) [meaning, that to understand how culture influences economic activity, we should first focus on its influence on proximate factors, e.g.] accumulation of capital, adoption of technology”.

Joining their debate, and considering what could be factors positively influencing the economic development of the Basque Country, that in the latest years often tops the Spanish rankings based on e.g. GDP per capita as well as falls in above middle-group among the European Union regions as per Regional Innovation Scoreboard, made me wish to share some ideas on the role of culture for territorial development.

In my view, three Basque cultural events have a potential interrelation between culture and economic development (see Picture): Pintxo Pote, Teatro Forum and Sagardotegi. All these events are very specific to the cultural traditions of the Basque Country and have been built/ are being built based on the cultural habits / choices of local people and may have a certain influence on economic development of the region. These three are just selected examples, which could be extended with many more (e.g. Gastronomic Societies, Local Sports, etc.).

Concluding, indeed, there seem to be some positive links between culture and economic development, but don't take them for granted. As noted by Landes (1998) in his book on The Wealth and Poverty of Nations, where he states “if we learn anything from history of economic development, is that the culture makes a difference (...) It [generally] always helps to affect and respond to the market. But just because markets give signals does not make that people will respond timely or well. Some people do it better than others, and culture makes it all difference (...) but it doesn´t stand alone (...) Monocausal explanations will not work. The same values thwarted by bad governance at home can find opportunities elsewhere” (p.517, 522). Therefore, as culture and economic development are linked changes in one will work on other and vice a versa. 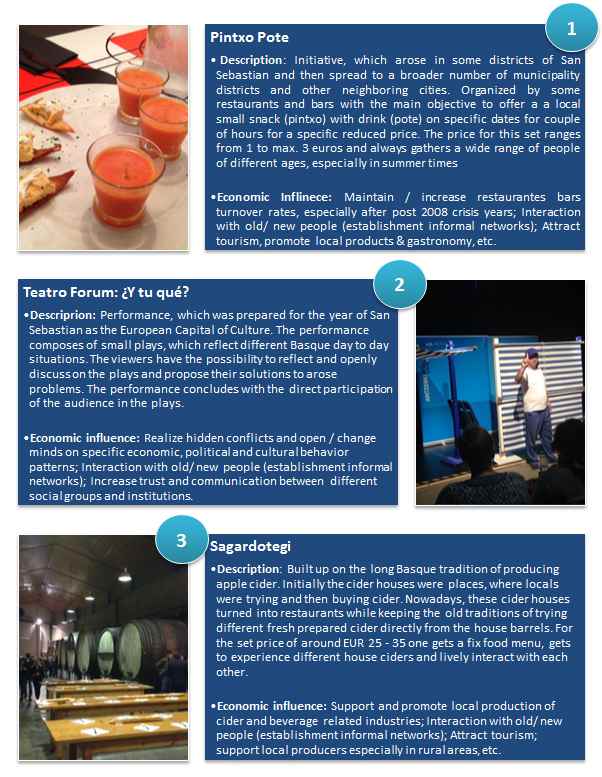 Anastasiia Konstantynova holds a Master Degree in International Relations and Economics from the Catholic University Eichstaett-Ingolstadt (Germany), where in collaboration with Orkestra-Basque Institute of Competitiveness she has also written her Ph.D. dissertation on comparative analysis of cluster policies and economic development of the Basque Country and Upper Austria. During her Ph.D. she has gathered broad international practical experience both in private and public sectors in Germany, Austria and Ukraine.

More articles by this author